Over the weekend, torrential rains hit Kumamoto and Kagoshima prefectures in Kyushu (the southernmost of the main islands of Japan). Some areas recorded as much as 100mm of rain per hour. Bridges were washed away, flooding reached the second story of houses and other buildings, and the death toll is rising. Meanwhile, the coronavirus situation complicates the typical ways of handling such a crisis, especially crowding in evacuation centers. Here is a news article yesterday, July 7th. And now the rain has moved to other parts of the country, causing landslides in mountainous areas – here is a different news article today.

One of CRASH Japan’s regional partners, a church network called the Kyushu Christian Disaster Relief Center (nicknamed “Kyukisai”), has begun to respond in Kumamoto Prefecture, and CRASH is supporting their work. Please partner with us as we partner with them. Because of the risk of spreading COVID-19, they currently don’t have a safe way to accept outside volunteers in the same way as in previous disasters, so members of churches in the local region have an extra burden. And of course a number of the churches have been severely flooded, as well as homes of pastors and church members. But from afar we can support them with relief supplies and recovery equipment.

We mentioned this a little bit in our last post, but here is more detail.

Tateyama, in Japan’s Chiba Prefecture, experienced two major typhoons: Typhoon #15 (Faxai) on September 9th and #19 (Super Typhoon Hagibis) on October 12th. Roofs were blown off by the typhoon on September 9th, and people have been living under the blue-tarped roofs ever since, because there are no temporary shelters in the city. Then Hagibis peeled back the blue tarps and dumped more water inside their already damaged houses. In Tateyama alone, 2134 houses suffered roof damage, and the mold growing in the wet ceilings and walls is a big health problem. As the winter approaches, people are desperate to get their roofs fixed, but local carpenters are overloaded already and the waiting list is 6 months to 1 year long.

So CRASH is teaming up with Hiroshima’s Christian disaster response network and the Salvation Army to provide a more thorough repair for some of those houses. Professional Christian carpenters from Hiroshima will be paid to do repairs free-of-charge for victims so that they can return to their homes without health risks, and they will be assisted by volunteers. ¥900,000 of the ¥1.4 million project budget has already been donated, but we’re looking for the remaining ¥500,000 (approx. US$4,600). Please also pray for local volunteers to help the carpenters – this is a team effort.

CRASH Japan was already working in Chiba in response to Typhoon #15 that hit the region in early September (sorry there was no post here about that – most of our communication has been on Facebook lately), but of course now there is much more work to do. Yesterday two CRASH leaders and leaders of several other groups met to discuss the best strategy going forward, and especially talked about the need for good roof repair work (not just tarps, but something more substantial). And of course there is plenty of need for cleaning out flooded houses, removing debris in neighborhoods, and many other activities. And funds will be needed to do these things. Please pray for all the victims as well as the volunteers, and please consider donating, or if you are in Japan, volunteering. More details will be known as time goes on – assessment of the needs and opportunities is just beginning.

See our Facebook page for photos and more frequent updates.

Please pray for northern Kyushu (Saga and Fukuoka prefectures), as torrential rains have caused widespread flooding. At one point, many areas were under a Level 5 (the maximum) warning for landslides, and 870,000 people were issued evacuation instructions. That level was lifted, but it might be issued again. As of this writing, three fatalities have been reported, but of course it’s too early to know the status of many areas, so there are probably many more.

Also, the rain is expected to continue and expand northeast, so additional flood warnings are also in effect for eight prefectures of southern and central Honshu.

As of this writing, here are three recent news pages in English:

Of course the situation is likely to change rapidly. 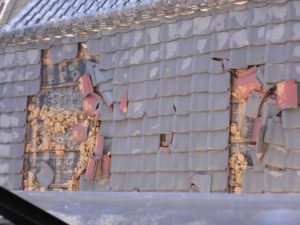 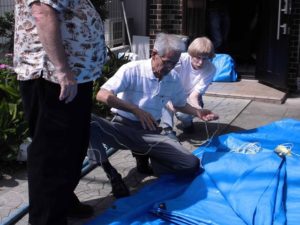 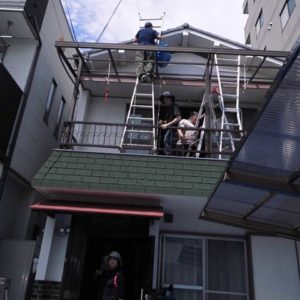 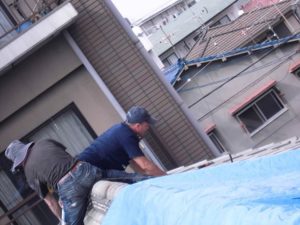 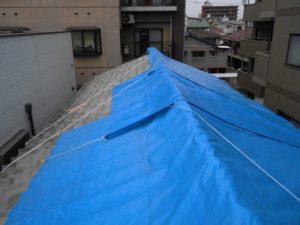 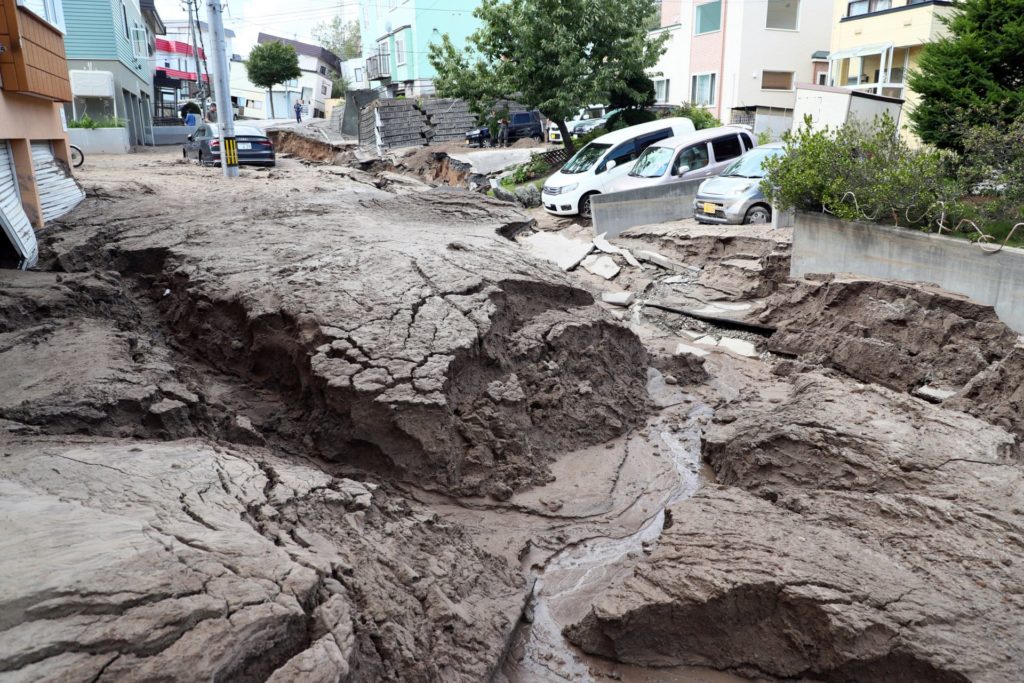 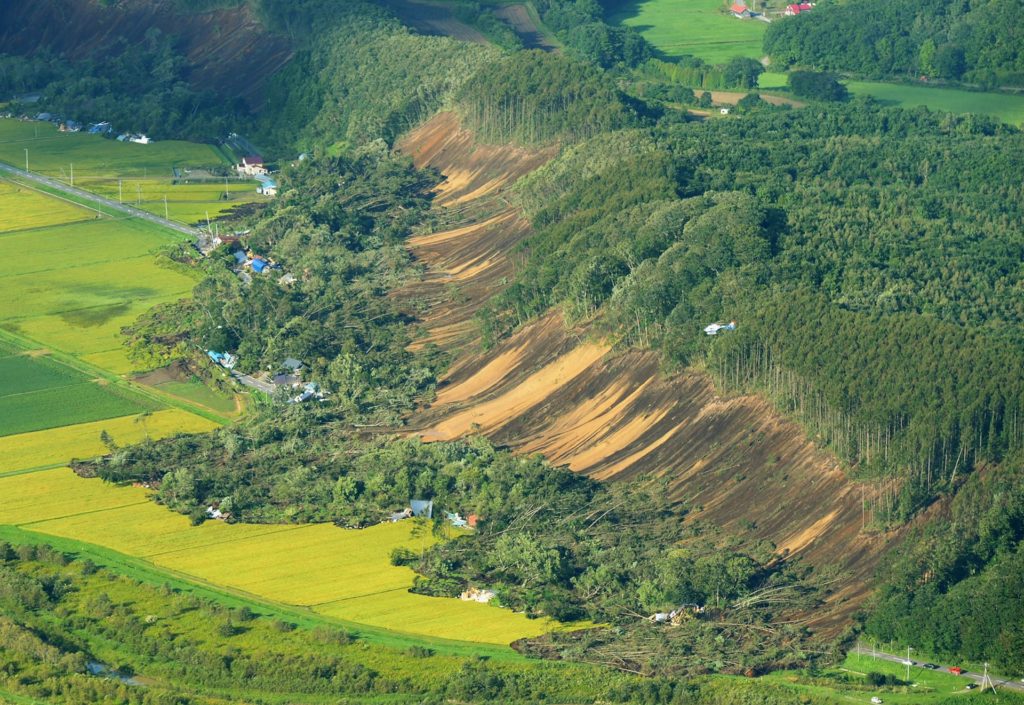 Recovery Work in Hiroshima and Okayama

In response to the torrential rains in July 2018, Christian volunteer centers have been set up in Kure, Hiroshima and Kurashiki, Okayama. Volunteers from CRASH and other groups and individuals form into work teams to go the damaged areas and do a variety of relief activities. The record-setting heat wave is making things worse – the high temperatures every day for the past couple of weeks have been in the mid 90’s (mid 30’s celsius) with no end in sight, and the death toll from the heat is approaching that of the floods and landslides!

Here are a few photos, but many more photos and reports of activities can be found on CRASH’s Facebook page. The damage is very widespread, and even just the physical recovery will take months or a year or more. Emotional recovery will take even longer, and CRASH desires to continue survivor care as long as it is needed.

Donations have been much smaller than for other disasters in recent years, perhaps because there was very little in international news. Please support this work! 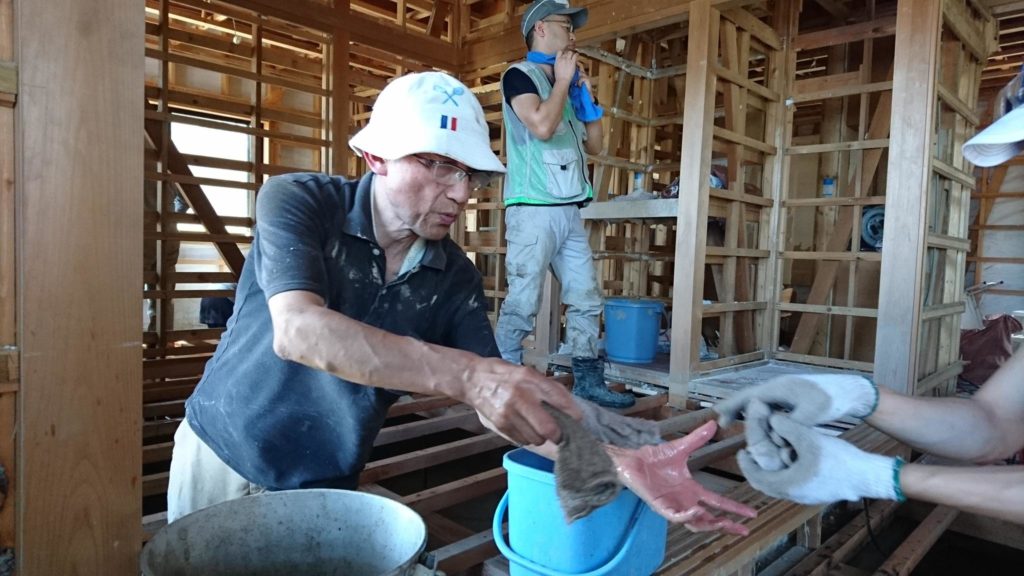 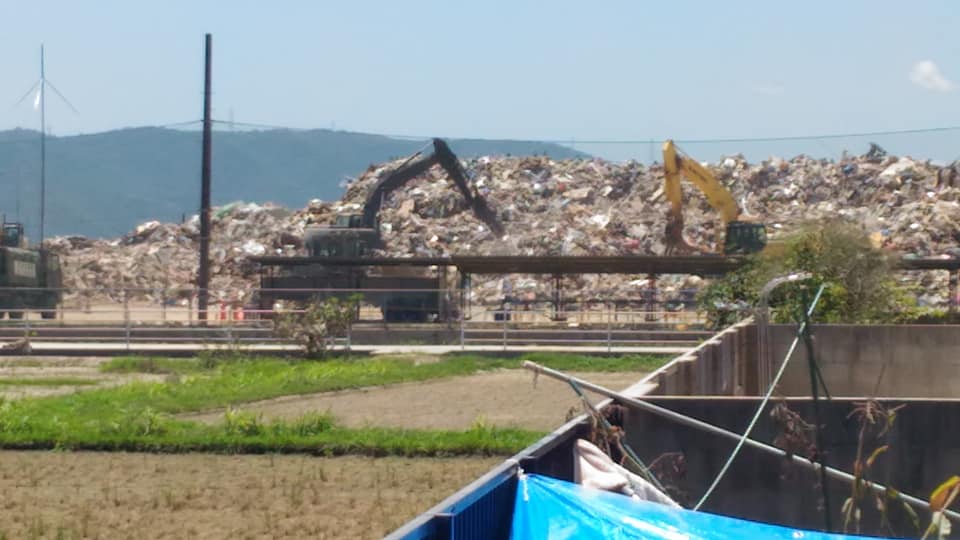 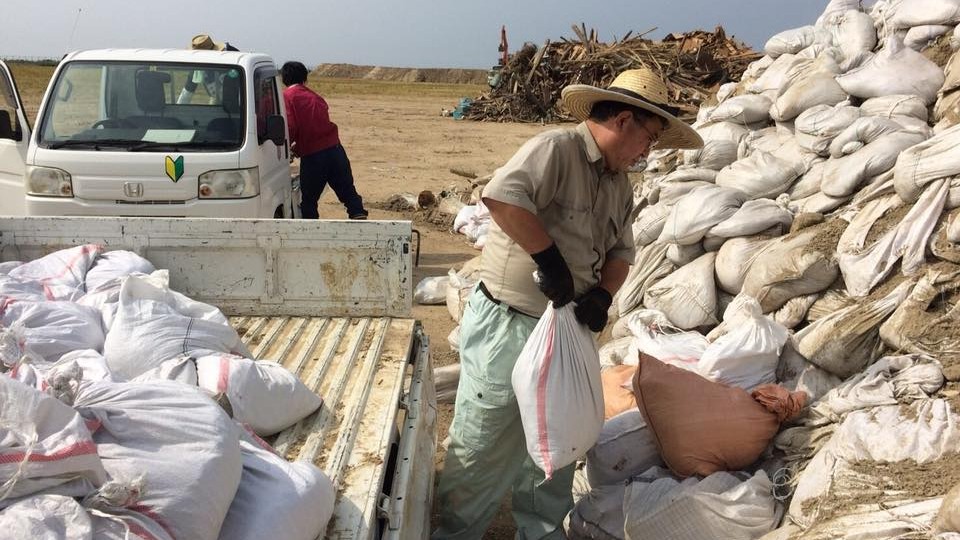 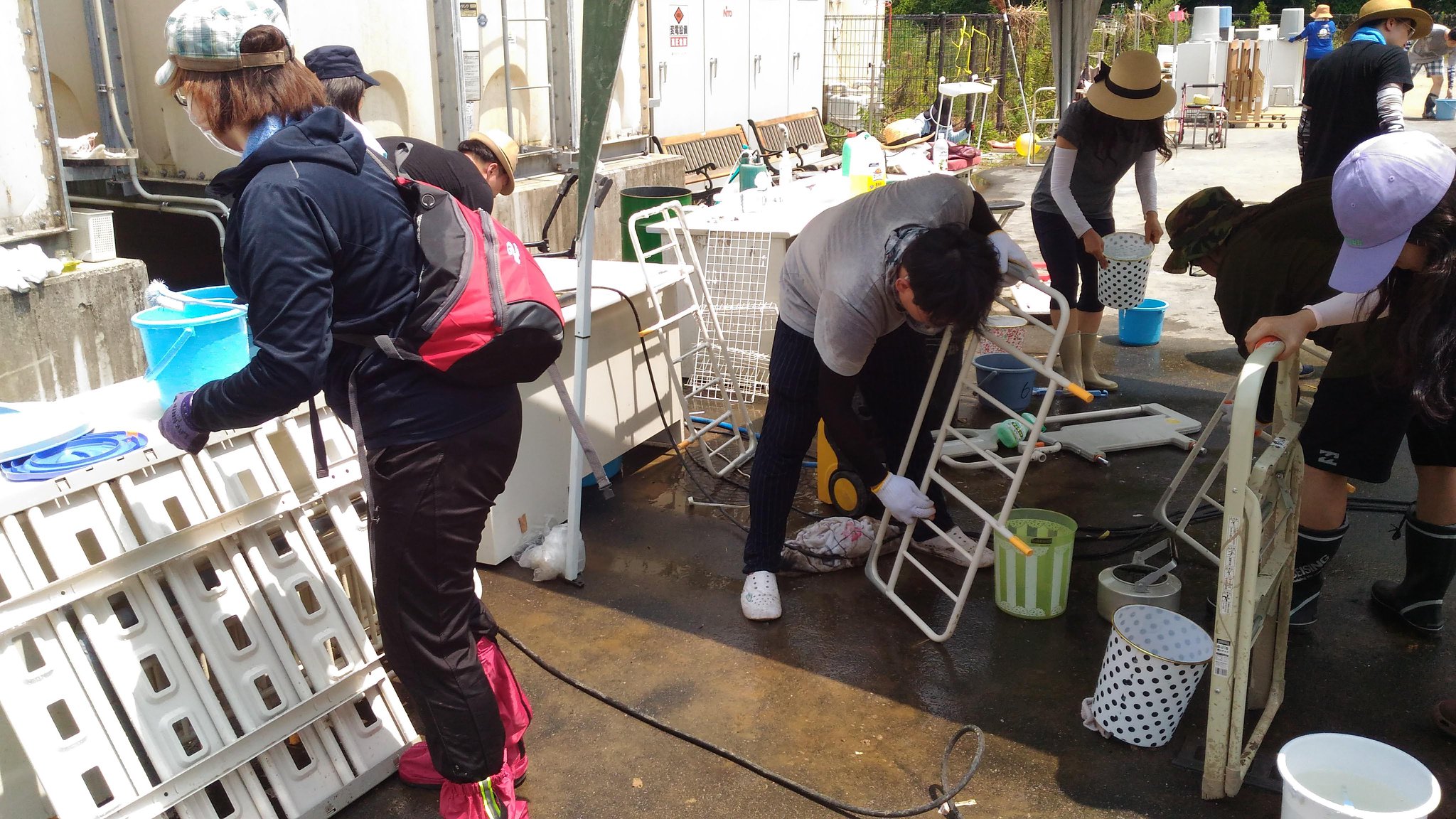 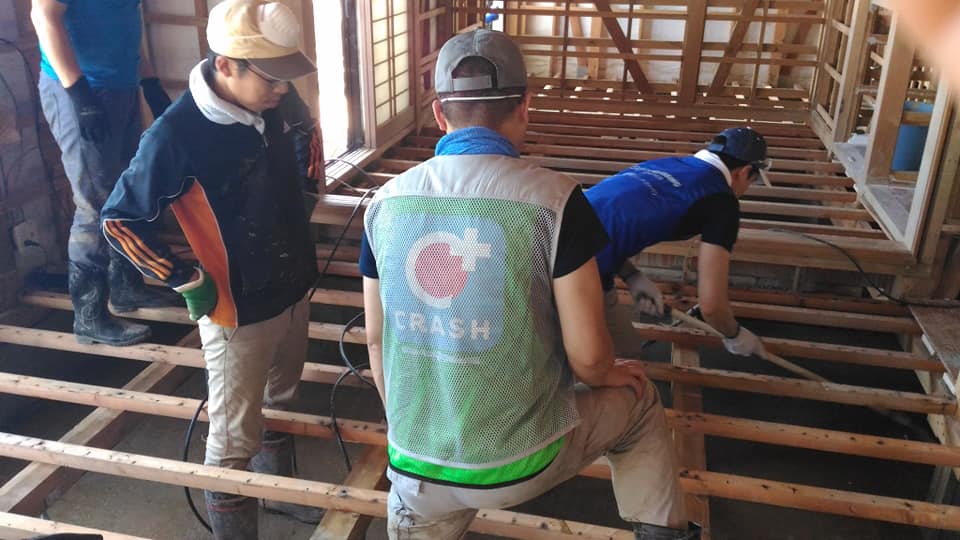 CRASH and others cleaning under floor

A huge swath of Western Japan was pounded by torrential rains for several days last week, causing widespread flooding, landslides, and other damage. The numbers keep rising, but as of this writing (July 10th), the death toll is over 120 and dozens are still missing. As of Monday evening, around 11,000 people were staying in evacuation centers in 15 prefectures. At one point, evacuation orders or advisories were issued for up to 6.3 million people, but the number later dropped to 1.8 million in 14 prefectures.

CRASH Japan immediately began networking with churches and other groups in affected areas to assess where and how we can help most effectively – that assessment process is still ongoing, and we are also staying out of the way of professional search-and-rescue efforts, but after that phase, we will begin relief work. Please consider supporting this large relief effort in both prayer and donations. To donate click here and write CRASH Japan in the comments section.

Thank you for your support of CRASH Japan. We are finally now giving you an update about our activities in the Kumamoto region of Japan. Sorry that we have not written before now – we started writing in each language several times, but we have all been busy dealing with the disaster response itself. The Japanese text below was written about two weeks ago, but we’ll give you more fresh information in English.

Beginning with a Magnitude 6.5 on April 14th that was merely a “fore-shock” of a magnitude 7.3 before dawn on April 16th, damage has continued to spread across a wide area as hundreds of aftershocks hit the area. Every day in Kumamoto, multiple small aftershocks can be felt. END_OF_DOCUMENT_TOKEN_TO_BE_REPLACED