The Little Church that Could

The Little Church that Could
(The Benefits of Giving)

Have you ever wondered if there were any benefits associated with giving?

According to the Apostle Paul, the Philippian church expressed their concern for him and the work he was doing by providing for his material needs. It seems the followers of Jesus in Philippi didn’t even have to be coaxed to give. They gave from the very start, supporting Paul as he ministered in Macedonia and Thessalonica. They saw the need and willingly and generously supplied support over and over again, no matter their own financial limitations.

Paul commends the Philippian believers, expressing his gratitude by listing the benefits of their generosity: 1) their generosity was being credited to their spiritual account; 2) their gifts were pleasing to God; and 3) the Lord was going to meet all their needs. (Philippians 4:10-20).

While raising missionary support in the mid – 1990s, Diane and I tried to get an appointment to speak at a small church in southern Washington. Sherry, our contact, was very apologetic about the state of their church – it was struggling and there were fewer than 50 people attending, and they could not offer us any support. We persevered in trying to get that appointment and after a number of tries, Sherry finally agreed.

We traveled to the church (all six of us Velascos) without any expectations of being supported, as our only desire was simply to bless the congregation. So the few days we spent with these believers, our family ministered in song, the Word and in presenting our future ministry as church planters to Manila.

As we neared our departure for the mission field, Sherry called us and said I think we can do $25 a month. We thanked them. But wait, there’s more!  She called two more times and by the time we left for the Philippines, the church had pledged to support us at $125 per month!

The focus here is not on the amount they were able to commit, but on the trustworthiness of God’s Word. Little did we know that while we were serving abroad, God had sent them a “shepherd” who lovingly nurtured these folks. By the time we visited this church family four years later, they had grown to a congregation of about 800! Their sacrificial giving was credited to their spiritual account- their gifts were offerings and sacrifices pleasing to God; and God saw fit to meet all their needs according to Christ’s richest blessings! (Philippians 4:10-19)

Like the Philippian church, the “Little Church That Could” in Southern Washington was blessed beyond measure because they gave beyond their capacity to give, resulting in God’s manifold blessings for the church and community wherein their congregants live and serve.

May each one of us experience the benefits of giving as we follow the Lord in obedience to His promptings!

An ongoing armed conflict in Marawi, Lanao del Sur started on 23 May 2017 between Philippine government security forces and militants of the Maute and Abu Sayyaf Salafi jihadist groups. The ISIS- supported militants burned churches, Christian schools and the jail and executed those who could not recite verses from the Koran. Most of the 200,000 residents of the city have fled the violence and are in evacuation centers or staying with friends or relatives in the neighboring areas.

We are appealing to Christians all over the globe to help us meet the needs of survivor-evacuees.

You may use your credit card or access PayPal to help families who’ve fled the fighting in Malawi City. Please click the donate button on the OperationSAFE webpage on the GLINTS website for donation instructions. Thanks in advance. 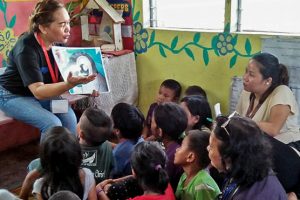 The first OpSAFE camp was held in an evacuation center in Iligan with 52 children in attendance. Pray for OpSAFE leaders that they may be of comfort to children and that many more children will be able to attend OpSAFE camps.

Evacuation centers are filled to over capacity. Pray that evacuees experience peace in the midst of this extreme trial.