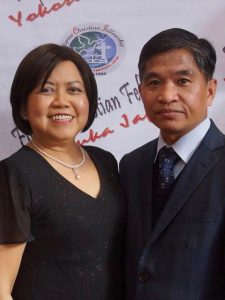 JBF (Japan Baptist Fellowship) has been involved in Japan since 1947. They envision people and communities transformed by the love and power of Jesus as it partners with missions-focused movements, not only Japan, but throughout the world. JBF has dynamic partnerships with missionaries from all over the world focusing primarily in serving the national Japanese church. Willy and Cora Bulseco are international partner missionaries under the JBF banner.

Willy and Cora Bulseco began serving in Japan in 1997, first as bi-vocational missionaries and second as full-time pastor (Willy) of the Filipino Christian Fellowship (FCF, since 2005) which operates under Command Fleet Activities at the Yokosuka Naval Base. Willy and Cora have one daughter they fondly call KC.

As JBF international partner/global staffer, the Pastor Willy provides a valuable service to navy personnel based at the Yokosuka Naval Base who deploy for long periods of time. They leave knowing their families are ministered to by the FCF family.

*Although Cora Bulseco lost her battle with cancer and passed away September 2017, she is now in presence of her Lord and Savior Jesus Christ.

Your donation(s) to JBF will help the Bulsecos sustain their ministry among US navy families. You may send your donations by the following means:

Check
Pay to the order of GLINTS, write JBF/Bulseco on the memo line and send to:

EFT
Electronic funds transfer is the best way to deliver your monthly support.

Online
You can donate via credit card by clicking the donate button below.