When It Rains, It Pours donate

When it rains it pours. We tend to equate this saying in the negative. Experiencing a string of three to four mishaps within a relatively short amount of time, we say, when it rains it pours. Such was my feeling in recent days. Within a period of two weeks we had to replace a microwave, our air conditioning (AC) unit quit and the garage door broke and wouldn’t open.

But as a child of God, born of His Spirit through His Son (John 1:12 [read the whole chapter for context]), I know He knows what I am going through at all times. I completely trust that my Father is able to provide for my every need, so I need not be perplexed with the daily travails of life I encounter as His son (but He understands when I get anxious from time to time).

We live in a small townhouse having limited space in our kitchen/dining area. The decision to replace the microwave was more out of practicality, but it needed to be done. We gave away our huge microwave (circa 2003) and replaced it with a smaller one that could really fit on our kitchen counter.

I did a good thing by having our furnace and AC compressor tuned up. It was a good deal or so I thought. A technician from HVAC Services (not its real name) came and did his thing, cleaned both units and recommended some parts be changed to which he included a quote. Hmm . . . I thought, wow, this is high.

Being the good shopper that I am, I immediately called a friend from Integrity Heating and Cooling (its real name) and asked for a pricing quote which definitely came out lower. I had done my homework and scheduled a tech from Integrity to do the job on September 6th. However, the AC unit all of a sudden quit a couple of days before the scheduled appointment – two of the hottest days this summer in Chicago!

Rafael (tech) came on the 6th, and it didn’t take a whole lot of time for him to replace the parts on the AC and furnace units, but the AC still wouldn’t work. His assessment? The fan motor on the compressor failed. I had a decision to make but being that it was one of the hottest days of summer, it was a no-brainer and had Rafael replace the motor. After finishing, Rafael, with sweat pouring down his face, said it was done. Ah, cool air once again came through the vents. (Rafael commented later that the reason why the fan motor failed was the tech who earlier tuned up the AC unit either made a mistake or intentionally reversed the polarity of the fan motor wiring. Only the Lord knows.)

Now, the garage door. It wouldn’t even budge as I tried to lift it Saturday night (09/10). I asked our neighbor, Craig, if he wouldn’t mind helping me figure out what was wrong. He came over, checked out the garage door, and then came back with rope. What on earth was he thinking? 🙂 Anyway, he looped the rope on the handle of the garage door and said, lift! It was heavy but it did open. Craig looked up and declared, “Your torsion spring is broken.” I looked, and it was easy to see it had split in half.

I prayed, “What do I do now?” The Lord reminded me of Miguel, so I called him and said, I have an emergency and need your help. He is REALLY a busy man. But he replied, the earliest he could come was Tuesday (09/13). Upon arriving, Miguel took one look at the door, and he lifted it with one hand. Amazing.

The challenge now was to find a store nearby that had the specific torsion spring for our garage door. Smartphones and Google to the rescue. Menards had it, so off we went, bought the spring, and Miguel replaced it. While he was on the ladder he commented, “Oh, you have an electric garage door opener.” I said, yeah, but it doesn’t work. I had attached the opener a few years back but the screw that was supposed to lift the door wouldn’t turn. Miguel says, “I’ll take a look at it after I’m done with this.”

It took awhile to adjust the spring until the tension was just right. After Miguel made the final adjustments, he asked me where the switch to the door opener was. I pressed it, and I heard a whirring sound. I asked, is it working? Miguel said, “Yeah, it’s working.” He attached the arm to the door and tried it again. Hallelujah, it worked. We programmed the remotes and we were done for the day.

When it rains it pours, but God’s provision is ever-present even before the rain stops. A couple of weeks ago we were surprised to receive a check from our mortgage bank. It was an overpayment to our escrow account. The amount from the bank covered the repairs on the AC, garage door, and even the purchase of our small microwave.

Not only did He provide the funds to cover all three needs but also allowed quality time with friends who showed love through their acts of kindness. Expressions of love are great but deeds borne out of love are powerful! Trust Him fully, even through the rain. 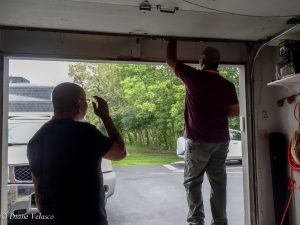 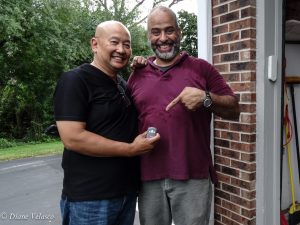