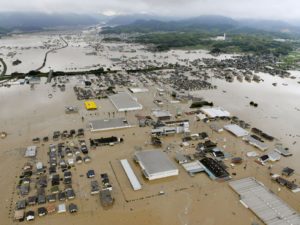 A huge swath of Western Japan was pounded by torrential rains for several days last week, causing widespread flooding, landslides, and other damage. The numbers keep rising, but as of this writing (July 10th), the death toll is over 120 and dozens are still missing. As of Monday evening, around 11,000 people were staying in evacuation centers in 15 prefectures. At one point, evacuation orders or advisories were issued for up to 6.3 million people, but the number later dropped to 1.8 million in 14 prefectures.

CRASH Japan immediately began networking with churches and other groups in affected areas to assess where and how we can help most effectively – that assessment process is still ongoing, and we are also staying out of the way of professional search-and-rescue efforts, but after that phase, we will begin relief work. Please consider supporting this large relief effort in both prayer and donations. To donate click here and write CRASH Japan in the comments section.