From the Concert Hall to a Disaster Zone donate

A month and a half ago, GLINTS was contacted by Dr. David Boan who is the WEA director of humanitarian advocacy and service. Having known of the Velascos’ experience after disasters struck Japan (2011) and the Philippines (2013), David wanted them to prayerfully consider training Christian leaders in the Caribbean in disaster response. So, when David called, Levi and Diane said yes, as God had already been giving them a burden to participate in Christian disaster response after Hurricanes Irma and Maria. The receiving partners in Antigua were the Evangelical Association of the Caribbean (EAC) and the Antigua-Barbuda Evangelical Alliance (ABEA).

GLINTS’s purpose in Antigua was to come alongside Christian leaders eager to make an impact in the lives of survivors. Antigua absorbed about 1,600 Barbudans after Hurricane Irma hit, the entire population of the island! It is the first time in 300 years that Barbuda has zero long term inhabitants. So, there is much hardship and hopelessness among the survivors. 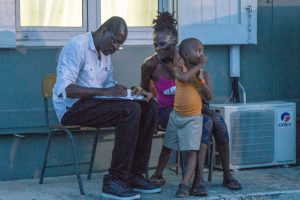 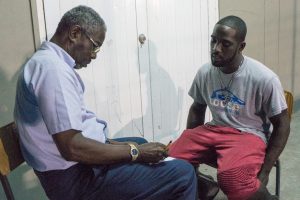 The exciting news is that there were 21 Antiguan Christian leaders who participated in the disaster response training. This first generation of trainees will have the knowledge base to provide assistance when the next disaster hits, mobilizing their respective churches for this effort. As part of the training, attendees had the opportunity to connect with survivors housed in two shelters by interviewing individuals regarding their experience before, during and after the hurricanes. 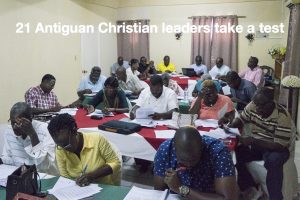 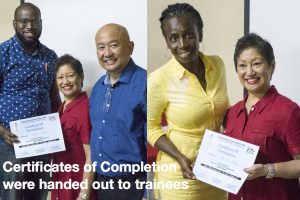 The ABEA officer who made all the arrangements also had the wisdom to introduce Diane and me to Antiguan government officials who oversee disaster relief, recovery and rebuilding. We learned from them the dire needs on Barbuda: 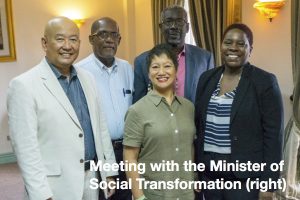 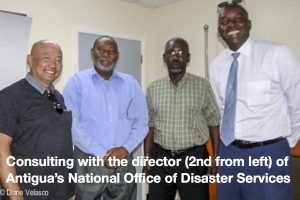 What our next steps look like. We are burdened for the children who have not had the opportunity to process their trauma stemming from the disaster. Please pray with us as we explore the possibility of conducting OperationSAFE (OpSAFE) programs in Antigua. OperationSAFE, a GLINTS global partner, is a ministry organization dedicated to administer psycho-social first aid to children affected by disasters and war. OperationSAFE 5-day camps have been most recently conducted in Mindanao, Philippines and Nepal with much success. Prayers for survivors, the Church in Antigua and GLINTS’s next steps are highly coveted, especially for Christians would continue to invest financially in the lives of people in the Caribbean as their disaster woes are now bypassed by the media.

From the Concert Hall to a Disaster Zone. Yes, literally. What a stark contrast as I (Levi) played viola at DuPage Symphony’s first concert of its 2017-2018 season (October 14th), leaving the next day aboard a 5:30am flight to Antigua, West Indies via Miami, Florida. Diane and I, however, had to stay overnight in Miami since our flight from Chicago was delayed an hour. With a tight connection time, our flight to Antigua left without us on board. We consider this delay a God-send as we were able to rest after two weeks of intense preparation for not only our assignment in the trip, but also leaving GLINTS work behind while being gone. We recharged our energies for the grind of days ahead.